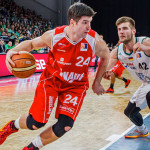 Starting WNY Premier Basketball Training is a passion project for me that finally came to its realization after a 14 year professional basketball career that spanned 8 countries and several continents.  With over 10 years of basketball training experience, much of which was spent training pros in my off seasons, I believe I bring a wealth of real world knowledge and credibility in the arena of basketball personal development training.

During the 2014-15 season, in addition to captaining the team I also unofficially assisted head coach Doug Spradley and the S. Oliver Baskets Wurzburg coaching staff with video scouting, editing and player development work.

In the summer of 2014 I received my Certified Personal Training License from the National Academy of Sports Medicine. I am interested in biomechanics and arthrokinematics and how the body reacts to certain stressors as they apply to basketball training.  Current basketball player development falls short without proper integration of many different fitness modalities, and since I was already in possession of a biology degree, further certification in strength and fitness seemed like a natural progression for my education in basketball and player development work.

As owner and head trainer, my mission with WNY Premier Basketball Training is to elevate the level of play and coaching locally while promoting the game of basketball within the area.

Contact us for your free evaluation, you have nothing to lose!